How does salt remove snow and ice?

When will the street in front of my house be plowed?

During a snow storm, road crews generally begin clearing streets according to the following priorities:

Why do some streets have less snow and ice when plowing is done?

Snow and ice removal plans try to provide consistent service, but some residential streets will be clearer than others due to certain factors, such as: when during the snow storm it is plowed, the amount of traffic on the road before and after plowing, the pavement temperatures and the type of pavement surface.

Why did I see a truck driving in snow with its blade up?

Sometimes plow trucks need to drive with their blades up. Trucks may drive with blades up when traveling to or from their route locations or maintenance facility in order to drive at normal speeds and avoid wearing out the plow blade when not on routes. Also, some trucks use an under-body blade for smaller snowfalls or spreading deicing materials.

Why is the snow plow operator driving so quickly down my street?

It might appear that snow plows are driving too fast for road conditions. Plows drive at around 25 MPH to efficiently clear snow and ice. The loud sound of plowing, flashing lights on the vehicle, snow discharge and sparks from contact between the plow blade and uneven roadways may make the plow truck appear to be driving faster than it is.

Why is snow pushed in front of my driveway?

Snow plows are designed to push snow to the side, so it is inevitable for snow to collect at the end of driveways and sidewalks during plowing. Plows will make multiple passes down your street, which can cause additional snow to pile up at the end of your driveway after you have shoveled. Residents are responsible for clearing snow at the end of their driveway and at sidewalk crossings if they have a corner lot. It is illegal to shovel snow back into the roadway as this creates unsafe driving conditions.

If my driveway is plowed in and I shovel the snow back into the street, can crews come by and clean it up?

No. Putting snow back into the street is illegal and unsafe.

Is there anything I can do to help with my community’s snow removal efforts?

Yes. They are several actions you can do to keep your neighborhood safe and help snow plow operators do their jobs better, including: not parking on the street after it snows, shoveling snow from sidewalks before it turns to ice, not putting snow back onto the streets, removing snow around fire hydrants, driving slowly during a snow storm and keeping distance between your vehicle and snow plows.

What are the requirements for shoveling sidewalks?

It is the responsibility of homeowners to clear snow from sidewalks in front of their property as soon as possible. Shovel snow before it gets walked on to reduce the amount of ice that forms. Requirements for when snow must be removed from residential sidewalks vary for each municipality.

If I own a corner lot, do I have to clear the curb ramp, the portion of the sidewalk leading to the street?

Yes, residents are responsible for clearing snow from sidewalks in front of their property, including curb ramps. Help keep sidewalks accessible for people in your neighborhood by removing snow when plows push snow from the road onto curb ramps.

Who should clear snow from around the fire hydrants?

You are responsible for maintaining access to fire hydrants in front of your home. Keep your neighborhood safe in the event of an emergency by clearing snow around fire hydrants on your property.

What are the parking rules in the winter?

Parking rules vary by municipality. In general, street parking is prohibited after a snowfall of 2 or more inches so plow trucks can effectively clear roads.

What are the white or wet lines on the streets in the winter?

The white or wet lines are salt brine applied before a forecasted storm to prevent snow and ice from bonding to pavement. This is called anti-icing. Anti-icing is cost-effective and environmentally-friendly since it reduces the time it takes to clear roads after a storm and requires much less deicing material. 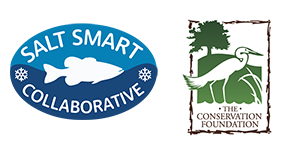 Salt Smart is coordinated by
The Conservation Foundation.